No shale gas production issue may be more fraught with partisan rhetoric than that of water well contamination.  The award winning documentary Gasland  leveled accusations and energized entire communities.  Industry reponse was equally summary in denial.  We need to get beyond all that.  Here is an attempt at clarity.

Well water contamination is very personal and frightening.  Think Erin Brockovich.  Airborne species appear not to get the same reaction.  Certainly, carbon dioxide in the air barely registers on the average personal anxiety scale.  Consequently, assaults on the quality of well water make for avid reading and activism.  In the case of shale gas, industry response has also been sweeping in denial.  Both sides play fast and loose with the English language, as will be shown.

There are two potential ways in which shale gas operations could contaminate aquifers.  One is through leakage of the chemicals used in fracturing.  These then would be liquid contaminants.  The second is the infiltration of aquifers by produced methane.  This is a gaseous contaminant, albeit in the main dissolved in the water.  If present, a portion may be released as a gas, as spectacularly depicted in  Gasland.  Natural occurrences such as the Eternal Flame Waterfall in the Shale Creek Preserve in New York, shown in the picture, demonstrate methane intrusion into a fresh water source. 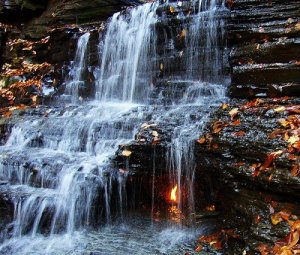 Natural contamination is either from relatively shallow biogenic methane from decomposing vegetation or from thermogenic gas from deep deposits escaping up along faults and fissures.  The last is generally due to tectonic activity at some time.  The two types of gas have fairly different fingerprints and can often be distinguished on that basis.  Good oil and gas exploitation practitioners will avoid producing in areas with significant vertical leak paths because they vitiate normal sealing mechanisms.

The distinction between potential liquid and gaseous contamination is important because the hazards are different, as are the remedies and safeguards.  Also, because well water could not naturally have the liquid contaminants, any presence at all is evidence of a man made source.  Therefore, simple testing of wells proximal to drilling operations is sufficient, with the only possible complication being some source other than drilling, such as agricultural runoff.  This is easily resolved because of the specificity in the chemicals used for fracturing.

Unfortunately, the two get lumped together in the statements by shale gas opponents and also the genuinely concerned public.  Some see methane intrusion as proof of well leakage as a whole and therefore equate it to chemical contamination as well.  Gasland reports “thousands of toxic chemicals” as the hazard.  In actuality, the mechanisms for possible leakage are quite different.  Methane as gas is much more likely to leak out of a badly constructed well than is a liquid.  Also, the mechanism by which methane could leak is well understood and it is not conducive to leakage of fracturing fluid.  The public cannot be expected to know this and so it is easy to see why the two get banded together.  To them, a leaky well is a leaky well.  Fortunately, this is not the case.

So, do producing gas wells sometimes leak into fresh water aquifers?  The answer is yes.  In all cases this is because of some combination of not locating cement in the right places and of a poor cement job.  Many wells will have intervals above the producing zone that are charged with gas, usually small quantities in coal bodies and the like.  If these are not sealed off with cement, some gas will intrude into the well bore.  This will still be contained unless the cement up near the fresh water aquifers has poor integrity.  In that case the gas will leak.  You will notice nothing in the prior discussion says anything about fracking.  In other words a badly constructed well is just that, no matter how the gas was released from the formation.

This distinction is lost on many.  The recent notable paper by Robert Jackson and others is the most comprehensive work of its kind to date.  It unequivocally shows no fracture chemical intrusion into water wells.  It also shows gas intrusion in disturbingly many cases, although later studies will take care to normalize for possible natural seeps and prior drilling activity.  Yet the title of the paper is Methane contamination of drinking water accompanying gas-well drilling and hydraulic fracturing. (Emphasis added) The last three words infer a causality that is not proven and in fact is contraindicated by the absence of fracturing chemicals in the water wells.

Industry proponents on the other hand make statements such as “hydraulic fracturing has never contaminated ground water”.  Lisa Jackson of the EPA testified recently under oath “I’m not aware of any proven case where the fracking process itself has affected water, although there are investigations ongoing.”  In precise terms this may be right in that fractures have not propagated into ground water.  Take the case of a well associated with fracturing operations that leaks gas but not liquid. One could argue that the poor construction would simply not have occurred but for the desire to fracture the shale reservoir.  So an opponent would take those very data and say “hydraulically fractured wells contaminate ground water”, while the proponent could say “hydraulic fracturing did not contaminate ground water”.  Neither would be wrong.  It is the public that will be confused with this license taken with the language.

Rhetoric aside, proper stewardship of our resources and the environment is possible.  Some possible measures are listed here.  Permits must be given only to oil companies with good track records, thus maximizing the chances of diligence in well construction.  Water wells proximal to intended operations (Jackson suggests 2,000 feet, I believe) be tested prior to drilling at the cost of the operator.  Logs be required to to assure cement integrity.  At a minimum the Cement Bond Log; this famously was not run on the Macondo well that blew up in the Gulf.  Routine testing of the water wells, with a prompt attempt to seal the well, if leaking.  This occurrence should also prompt a severe penalty.  All of this and adherence to sound drilling and completion practice will ensure the sustainable production of a valuable resource.

§ 3 Responses to BEYOND GASLAND

You are currently reading BEYOND GASLAND at Research Triangle Energy Consortium.