A recent issue of the Economist points out that types of innovation have changed over the last hundred and fifty years. The piece is based on a recent paper in the Journal of the Royal Society Interface and it relies upon data from the US Patent Office. The primary conclusion is that in the early years of patenting new classes of invention occurred, whereas in the modern day inventions rely on using combinations of existing classes. William Shockley’s transistor is cited as creating a new class, while Edison is seen as merely combining the classes represented by heated filaments, electrical supply and a vacuum.
At first blush, Edison’s light bulb being relegated to a mere “combinatorial” class is surprising in part because many consider it to be the quintessential invention. The Aha moment signaled by a light bulb cartoon is in the annals. So what gives? Basically, the authors believe that inventions creating new classes are due greater honor because they likely are seminal in generating new areas of endeavor. They imply that inventor superstars are those that create new industry, and cite names like Goodyear, Morse and Stephenson as the essential catalysts for the Industrial Revolution. The transistor certainly fits that mold. 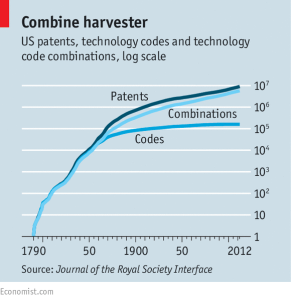 The figure shows the growth in total patents issued and how many are new codes (sub-classes) as opposed to combinations of classes. Note that the vertical axis is on a logarithmic scale. Whether an invention falls into a given class, say batteries or a sub-class say solar energy type (both real examples of classes), is determined by the patent office. So, to some degree, this point is a bit academic in that it relies on a judgment by these folks. Consequently, the determination to form a new class need not necessarily be the harbinger of great industrial activity. It could simply be because they could not find a place to slot it.
Possibly the greatest invention in the commercial practice of biology is the (1993) Nobel Prize winning Polymerase Chain Reaction (PCR). Some have described it in terms of biology having two epochs: before and after PCR. It allows the amplification of DNA sequences. This giant invention by Kary Mullis (incidentally a North Carolina native) nevertheless built on the work of others and in particular that of 1968 Nobel Laureate H. Gobind Khurana (in fact Dupont challenged the validity in a losing cause). It was an aha moment not unlike that of Watson and Crick in visualizing a double helix in the X ray diffraction images of DNA produced by Rosalind Franklin (who might have shared the 1962 Nobel had she not died of ovarian cancer in 1958). I seriously doubt it created a new class or sub-class. Yet it transformed a field of endeavor. I think we could conclude that a truly new class of invention may well be seminal, but that this quality can be achieved in combinatorial fashion.
On the matter of combinations, the patent office is very prescriptive on what constitutes invention. The granting of a patent requires two hurdles to be crossed: novelty and non-obviousness. One may build on the work of others but these two tests must be met. It is the second item that things get subjective. The invention must not be obvious to one of “ordinary skill in the art”. IP lawyers make a living splitting that hair. In the last few years the Supreme Court has raised the bar on this test. It has also raised it on what is known as enablement: the claimed invention must be described in sufficient detail so that a person of ordinary skill can replicate it. Gone are the days of “paper patents”.
This discussion would not be complete without noting that remarkable innovations may not be inventions in the legal sense. Innovative business models to capitalize on inventions are cases in point.
Vikram Rao

You are currently reading PATTERNS IN INNOVATION at Research Triangle Energy Consortium.