The White House Science advisor John Holdren is credited with suggesting that responding to the threat of climate change ought to be some mix of mitigation, adaptation and suffering, and all that remained to be determined was the mix. This statement implies the inevitability of climate change and that preparing for it must be a part of the response.  I suspect this cheered the climate hawks more than the doves.  The suffering part is right out of the playbook of economists, the dismal science folks.  Bleak though it may be, it is recognition of a stark reality.  The entire statement is an acknowledgement that doing nothing is in fact a choice for suffering.  Accordingly, climate hawks must not take too much comfort in the statement.

Even those who consider that climate change is a reality do not necessarily agree that climate science is “settled”, a characterization that is common. Nobody doubts that adding carbon dioxide to the atmosphere has adverse consequences to global warming.  But influential scientists such as Steve Koonin dispute the ability of our models to predict the balance between human and natural influences. Consequently, adaptation has to be an important part of the debate on response. 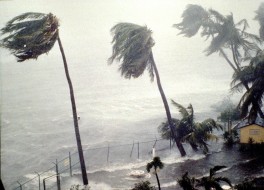 In discussing the Holdren utterance, David Roberts recently had some interesting takes.  He suggests that the effect of mitigation is global while that of adaptation is local. He goes on to conclude that mitigation is altruistic and adaptation is “the opposite”, serving only a self-interest.  We will now examine this very interesting point of view.

Mitigation is that great big grab bag comprising all the measures to reduce greenhouse gases. These range from carbon capture and storage to curbing fugitive methane to energy efficiency and conservation.  Many of these have positive outcomes to society beyond the carbon mitigation objective including economic value created. Mitigation certainly has global impact.  In fact the common complaint is that India and China are not doing their part and consequently exacerbating the problem.  So in that sense a mitigation action is altruistic because it benefits distant faceless people unknown to us.  But it is not that clear and simple.  Mitigation measures include many that are technologies which can be sold to other parts of the world for a profit, neatly removing them from the altruism bucket.  An example is small modular nuclear reactors which are well suited to the over a billion people with no access to power grids. This serves the purpose of mitigation through not using fossil fuel (in the case of villages it is usually subsidized diesel).  But it is also adaptive because distributed power is inherently more resilient due to absence of grid infrastructure. It is easier to implement distributed power when there is no grid at all.  Consequently this is a technology from the first world that is uniquely appropriate for the third world.  Transferability could apply to a host of energy efficiency technologies.  The execution of these measures in the west could well be viewed as altruistic but not the transfer to other parts of the world.

Roberts also contends that carbon mitigation is innately altruistic because the benefit accrues to people in the future. This would have a ring of authenticity were it not to be for the popular refrain that climate action makes the world better for “our grandchildren”.  There goes altruism.  Incidentally, there is a school of thought that privation well into the future ought to be discounted with a social discount rate (similar to a financial discount rate) of as much as 3%.  But this is not the forum for that discourse.

Adaptation is even more opaque. Roberts suggests that adaptation is solely local and “benefits only those proximate to the spender”.  While this is true of the measures taken to account for sea level rise (in fact he uses the example of sea walls), many other measures have immense transferability even without redistribution of wealth.  An important example is sustainable food production in the face of climate change.  Here we define climate change to be “alterations in climatic and weather conditions characterized by shifts in average conditions and in the frequency and severity of extreme conditions” as discussed in a 2012 report on adaptive food production methods. These approaches are in large measure transferable to the second and third worlds and in some cases explicitly so.

Some of us here at RTI have been mulling over the extent to which distributed production of fuels and chemicals may be seen as an adaptive defense against climate change. Distributed production is a relatively new concept of producing chemical plants fifty to a hundred times smaller than conventional and located closer to either the raw material source or the market.  For purposes of this argument we will assume cost neutrality with respect to the alternative conventional large plants.  Certainly this action would result in shortening of supply lines of raw material, finished goods, or both.  Supply lines are notoriously disrupted in extreme weather.  Fewer long distance pipelines would also result in a smaller environmental footprint.  This issue merits study in part because to date the entire push for distributed production has been premised upon economics only and not the societal benefit.

§ One Response to CLIMATE CHANGE, ADAPTATION AND ALTRUISM