A recent story in Forbes tells the tale of the rise, fall and rise of LyondellBasell, a Houston based chemical manufacturer.  At first blush the story is a gripping tale of savvy investing, risk taking and two opposite bets by equally shrewd investors.  But the true message is really none of that.  It is entirely the plus side of the Ethane Dilemma that I discussed in my shale gas book two years ago.  It is also a lesson in the possibility that behind every problem lurks an opportunity.

The tale unfolded in 2007 when Basell, a European chemical company bought struggling Lyondell Chemicals.  By 2009, in part beset by the recession, the newly named LyondellBasell sought Chapter 11 bankruptcy.  Apollo Global Management saw an opportunity and essentially purchased the company for about $2 billion.  Meanwhile, billionaire Len Blavatnik, one of the principals in Basell also bought into positions in the restructured company after himself having lost serious money on the bankruptcy.  The company took off and Apollo cashed in about $12 billion in 2013. Not a bad profit in five years. Blavatnik, with a similar proportional profit in hand, instead of cashing out, continued to buy and is reported to be sitting on $ 8 billion in largely unrealized profits.  The Forbes story focuses on how savvy billionaire investors took different paths at this point.

Ethane Price as Compared to WTI 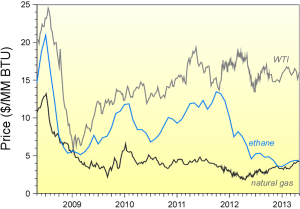 The Forbes story credits the shale gas revolution with the performance.  In a sense that is true but the explanation is more nuanced than that. First is the fact that the bulk of LyondellBasell profits come from ethylene and derivatives.  Second is that ethane prices started to drop relative to oil in 2009.  By mid-2010 ethane was nearly half the price of oil on the basis of energy content (see figure above). Ethylene is conventionally produced from the oil derivative naphtha. Ethylene from $4 per MM BTU ethane is about $ 600 cheaper to make per tonne, and a tonne of ethylene sells from $1000 to $1500 (the price in 2014) depending on market conditions.  This was the primary reason for LyondellBasell profitability coming strongly out of bankruptcy. In the Forbes story there is a quote: “Billionaire hedge fund manager Dan Loeb used more than half of his first-quarter letter to his investors wondering why Dow Chemical Co.–where returns have trailed LyondellBasell significantly over the last three years–wasn’t more like its rival”.  In my shale gas book I mention that 33 of 36 US crackers are on the Gulf Coast, with just two in the mid-west and one small one in Kentucky. Those two just happen to belong to LyondellBasell and are very close to ethane supply. In recognition of this, the company quickly added capacity to these two. Result: enormous profits capitalizing on the low raw material prices and LyondellBasell was uniquely positioned with respect to competitors such as Dow. Besides, Dow, while a major ethylene producer, has a much broader portfolio than LyondellBasell.

In 2013, when Apollo cashed out and Blavatnik increased his stake, ethane pricing simply dropped through the floor (see figure above). In fact the spot price of ethane in the mid-west is even less than that shown in the figure. This explains why the company profits continued to climb and the stock stands at 50% over the figure when Blavatnik last purchased stock from Apollo. In the Forbes interview Blavatnik attributes the success of his strategy to luck and hopes the luck will continue. More likely is the possibility that he saw the trend, which started in 2012.  The fundamentals underlying the trend, low natural gas price and high prices for propane and butane, will continue to cause wet gas to be produced preferentially.  Half of that is ethane, with no value unless converted to a chemical. Consequently, ethane will continue to be a glut until crackers show up. But unlike expansions of LyondellBasell crackers, new ones take many more years, significant financing, and ethane pricing crystal balls extending twenty years. In late 2013 Shell postponed indefinitely a cracker destined for Pennsylvania. Small, distributed, crackers as suggested in previous posts could be a factor in this game.  Cheap stranded ethane represents a business opportunity.  LyondellBasell merely happened to be in the right place at the right time.