As they say, size matters.  Nowhere is this more critical than in inhaled particulate matter.  The fate of these particles in the human body is distinctly different depending upon size.  Above 10 microns (micrometers) the particles tend to be captured in the nose and throat. Below that they are apt to enter the lungs.  The truly small particles, less than 2.5 microns, are designated PM2.5 and go deep into the tissues.  They are implicated with all manner of morbidity and mortality related to respiratory and heart disease.  In some estimates 75000 premature deaths annually are attributed to this cause in the US.  The numbers are greater in Europe.  The worst hit are rural areas of India and Africa where the cause is biomass combustion for cooking.  Women doing the cooking, often in enclosed huts, and the children in proximity, are the worst affected.  In fact, in general, respiratory damage short of mortality is much greater in growing children.

One of the major sources of PM2.5 is combustion in general and of coal in particular.  Natural gas substitution of coal, done for economic reasons, will have a direct positive effect on particulate emissions.  The impact on carbon dioxide reduction is well known and contributed in part to the fact that the US, a non-signatory to the Kyoto Protocol, has made the most progress of any nation in carbon mitigation.  But the positive effect on public health through reductions in PM10 and PM2.5 are less well known and need better airing.

The EPA has gone back on forth on regulations regarding condensable particulate matter.  First some definitions are in order.  Particulate matter from processes such as combustion comes in two varieties.  The first is material that is already solid and in the size range of under 10 microns and somewhat amenable to filtering out.  The second is particulate matter or liquid droplets that form outside the process due to the condensation of vapors such as sulfuric acid mist and metal vapors, either directly or upon reacting with something.  This last is almost exclusively in the PM2.5 class and hence the most deleterious.

In 2008 the EPA added condensable PM to the regulatory compliance list.  In October 2012, they issued a “clarification” removing condensable PM from the list of measurements required, seemingly because it is not PM in the smoke stack.  Producers are still required to calculate the value.  This regulatory confusion aside (at least I am confused) PM2.5 is a killer that needs monitoring and reduction. 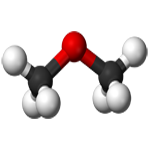 DME molecule: no carbon to carbon bonding means no soot on combustion

Diesel Displacement:  A less obvious consequence of the shale gas bounty is the emerging area of diesel displacement.  Diesel has a lot to recommend itself.  The higher energy density (than gasoline) and higher efficiency engine makes it the fuel of choice for heavy duty vehicles, locomotives and ships.  Advances continue to be made in particulate filtration.  However, there is the question of massive legacy fleets, especially in China and India.  Tens of Indian cities have converted to CNG for public transport, with well documented reductions in mortality and morbidity.  So, the public health value of displacing diesel is not in dispute.

In the US shale gas has entered the debate from two angles.  On the one hand the cheap gas allows for economical displacement of diesel; more on that below.  But not to be forgotten is the fact that shale gas operations are often in areas proximal to homes and businesses.  These operations use diesel copiously.  All fracturing pumps run on the stuff.  Every truck hauling water and sand runs on diesel.  While it is true that trucks are a part of the existing commercial enterprise, the trucks associated with shale gas operations are additive and comprise short but intense bursts of activity.  As a first step all fracturing pumps ought to switch to alternatives with low or no particulate emissions.  Apache Corporation is already piloting the use of LNG in place of diesel, so feasibility is not the issue.  Although the pumps belong to a service company and they are manufactured by yet another such as Caterpillar, championship by the oil company customer gets things done.

Diesel Alternatives:  Stationary equipment such as described above and backup power generators are the simplest targets because the logistics of supply of alternative fuels is more straightforward.  The substitutes most likely to take a hold are compressed natural gas (CNG), liquefied natural gas (LNG) and dimethyl ether (DME, pictured above).  Each of these has lesser energy content per gallon than diesel, but is economical even within that constraint for stationary applications.

For motive applications the energy density penalty pretty much makes the choice of alternative.  For short haul applications with well-designed refueling hubs the least dense and cheapest CNG makes the most sense.  The Waste Management trucks in the Research Triangle area are an excellent example.  For medium haul DME make the most sense and LNG for long haul and trains and boats.  DME and LNG are essentially interchangeable (engine modifications are slightly different) and the choice will depend on factors such as refueling infrastructure.  This last has strongly been enabled for both by recent advances in distributed production of the fuel.  This is critical for LNG because long distance supply is less practical when the container has to be maintained at -161 degrees C.

The public health imperative relative to PM2.5 needs more public activism.  Displacing coal fired electricity and diesel fueled engines are worthy objectives and ought to be accelerated.  The first is happening purely as a consequence of shale gas being cheap.  Diesel displacement will take more effort, including policy action by cities and states.  Those opposed to shale gas production on environmental grounds would do well to consider the positive impact on PM2.5 reduction.

§ One Response to PARTICULATE MATTERS