Methanol is pro life as well, the good life.  Lower cost driving that is relatively immune to gasoline price run ups and lower emissions to boot, now that is living well.  Add to that the fact that in the production of methanol we have choice of starting raw material.  Unlike ethanol, that other alcohol, methanol is easily derived from a host of carbonaceous materials other than natural gas.  So it is not subject to price volatility, as for example was ethanol, to the vagaries of corn prices.

As we have discussed previously, flex fuel vehicles capable of running any mixture of either alcohol or gasoline would afford consumers choice.  The E85 experience was not all positive because ethanol prices without subsidies were relatively high in the US.  Brazil, with its low cost sugar cane derived ethanol is a different story.  Now with the disappearance of the import tariff on ethanol, perhaps Brazilian ethanol will be viable here.  But ethanol from biomass still suffers economic hurdles.  So, the choice of feedstock in this country is pretty much limited to corn.  Other crops such as sweet sorghum have not yet become viable.

Methanol on the other hand is very simply produced from natural gas, coal, petroleum coke or woody biomass, pretty much in order of ascending cost to manufacture. 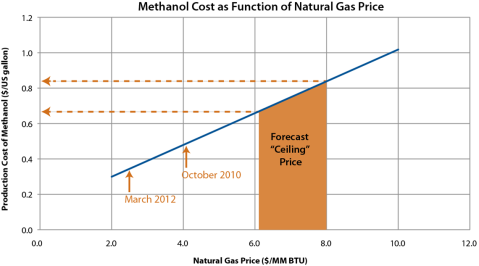 This chart was derived by RTI engineers for a typical methanol plant producing 5000 tonne/day.  Plants double or triple that size are also not uncommon.  Costs at such plants would be comparable.  At April 2012 prices methanol could be produced for about 30 cents per gallon.  Add to that typical distribution costs and taxes of 30 cents.  Then double that for gasoline equivalence because methanol has half the energy content of gasoline.  We come up with methanol costing roughly $1.20 at the pump on a gasoline equivalent basis.  Compare that to regular gasoline today at about $3.80 per gallon.  Do keep in mind, though, that with today’s low compression car engines the methanol tank would be roughly twice the size of a gasoline tank, or you would simply have to refuel more often.  This would be a part of the consumer trade off.  As reported in a previous blog posting, high compression engines could eliminate that penalty.

But natural gas pricing today is abnormally low in large measure due to the warm winter.  A more normal price would be the October 2010 price shown in the figure.  That would put methanol at the pump at about $1.60 per gallon, still a steep discount to gasoline.  Looking out further, we forecast the ceiling for natural gas pricing as shown.  This has support from the study by Amy Jaffe and colleagues at the Baker Institute in Houston, who used different methods.  At the upper end of the range we could expect methanol at the pump to be $2.30 per gallon.  The likelihood of gasoline dropping to those levels in the foreseeable future is extremely remote and episodic at best.  All forecasts of oil prices are well into three digits and not the sub $70 per barrel they would have to be to get gasoline to break even with methanol.  We are forced to conclude that methanol will be cheaper than gasoline on a miles driven basis for decades.

That leaves the question of whether natural gas supply will keep up with the demand.  The concern is valid to some degree because of the expected massive displacement of coal as a fuel for electricity production.  Add to that the expectation of rapid expansion in other chemical industry segments such as fertilizer production.  Finally, export of liquefied natural gas (LNG) will certainly be in play.  LNG adds between $3 and $4 to the cost of a million BTU, the position in that range depending upon how far is the delivery point.  Even with that mark up, gas at prices shown in the graph will be profitable for delivery to countries such as Japan and India, who are currently paying over $12 per million BTU.  Such export is being resisted by the US chemical industry because of worries of price escalation, so it may well not happen.  Said industry is enjoying a windfall at current gas prices.  Anhydrous ammonia sells for between $600 and $800 a tonne.  The raw material cost of that at April 2012 natural gas prices is under $60.  That is the definition of profit.

Methanol from coal can be expected to cost about the same as natural gas at the upper end of the range in the figure.  For this computation we take $25 per tonne for the low grade coal at the mine mouth.  High grade coal at $150 per tonne would be out of the question and unnecessary.  Petroleum coke is a bi-product of heavy oil processing and has very low value.  But it is very high in carbon and extremely low in ash.  It can, however, have high sulfur and heavy metals.  These last are manageable.  One could expect methanol from petroleum coke to be just a bit higher than from low grade coal.  All of these are still very competitive with gasoline.  Finally there is biomass.  The lignin content of some woody biomass is particularly deleterious for ethanol production.  But thermal processes used to make methanol are not bothered by that aspect.  The costs would be higher than for the other sources discussed but further research could bring that down.

In summary, methanol offers consumers of transport fuel a viable low cost choice.  Producers will have choice with respect to raw materials, with natural gas currently being the low cost winner.  But in the future, a significant portion could be from poorly utilized resources such as low grade coals and petroleum coke.  Finally, renewable sources such as woody biomass could be made economically viable.  The only loser in this scenario will be imported oil.  If tempted to drink to that, make sure it is ethanol.

§ 8 Responses to METHANOL IS PRO CHOICE

You are currently reading METHANOL IS PRO CHOICE at Research Triangle Energy Consortium.