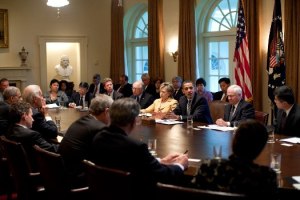 This post is loosely based upon the November 18th RTEC Breakfast Forum topic, Implications of New State and Federal Leadership on Clean Energy Enterprise

The midterm elections produced dramatic shifts in the political balance in Congress and both legislative bodies in North Carolina.  The effect on energy policies can be expected to be significant as job creation will trump climate change.  Conventional energy will be up while ethanol will be down.  A price on carbon, barely possible in the previous regime, will now be off the table.  That will likely put the Integrated Gasification Combined Cycle (IGCC) variant of clean coal on life support.  It will be interesting to see whether son-of-SuperGen in Illinois will survive.

National energy security will move up on the agenda.  Steve Chu and his aggressive research agenda will go under the microscope.  Business friendly policy will be in and energy efficiency should be unaffected.  In the “anybody’s guess” category is the federal subsidy on electric cars.  In North Carolina, oil and gas exploitation will be in.  Wind could be buffeted because of fervent championship by the past administration; hopefully they will rise above that.  These and more are discussed below.

Energy security considerations are likely to lead to encouragement of domestic resource exploitation.  This will entirely be in the province of oil, and to a lesser degree gas.  Replacing imported oil with domestic fuel substitutes will create jobs. The obvious implications will be toward deep-water exploitation related policy.  Also, expect considerable pick up in oil from tight rock, such as the Bakken and Eagle Ford prospects.

Electric vehicles fall in the category of oil replacement.  The current subsidy of $7,500 per vehicle will probably be kept, but the timetable for taper off and elimination will probably accelerate.  General Motors has been reborn and their results, including the post IPO stock price, are healthy.  Their considerable bet on the Volt and the attendant job creation will be a factor.  Some corporations, most notably GE, are doing their bit in this regard.  GE recently committed to purchasing 25,000 electric cars from GM and Nissan by 2015.  Their purpose was to give the manufacturers the certainty to move into mass production.

Biofuels will be a mixed bag.  Drop-in fuels such as alkanes from plant matter will be favored over ethanol, and mixed alcohols will be somewhere between.  This is because of the plug-and-play convenience of drop-ins; nothing different about the engine, the fuel pump or the distribution infrastructure.  A story in the Economist expands on this point.  Alkanes made with sugar as feedstock may be advantaged by the fact that Brazilian sugar has no import tariff.  In fact, there is a good chance that the 50 cents per gallon tariff on Brazilian ethanol will go away, as may the 52 cents subsidy to blenders of corn derived ethanol into gasoline.  In a burst of candor, Al Gore admitted recently that his Senate tie-breaking vote for it was solely for the purpose of being elected.  He now says the subsidy for first generation ethanol, read corn based, must go away.  The new Congress will likely make this happen.  But not any time soon.  The recent Obama compromise on taxes contained an extension of the ethanol subsidies.

Low carbon sources of energy will be disadvantaged by carbon not having a price.  However, the cap and trade system in Europe has not really worked either.  The price has fluctuated and has generally been too low to make much difference.  Consequently, the responsibility will shift to clean energy, making it purely on economic terms.  This is not all bad because if and when carbon emissions carry a penalty, the alternatives will be even more advantaged.

Wind energy from certain sources is already very competitive with coal, especially if externalities relating to the environmental cost are considered.  Help in the form of federal support for research and development could be helpful.  The recent report from the President’s Council of Advisors on Science and Technology suggests major funding initiatives and associated models in revenue generation for this.  But the revenue models are in fact taxes on existing energy units.  While modest in size, the new Congress will likely be opposed unless job creation is pitched as a principal benefit.  Healthy skepticism of federal coffers of this sort will also be an impediment.  The fund created previously by a tax on nuclear energy was not seen as spent wisely.  Even France has gone away from this model.  The French Petroleum Institute (IFP) used to be funded by a tax on vehicle fuel.  Similarly, the Gas Research Institute in Illinois was funded by a tax on natural gas transport.  Both models are now defunct.

In North Carolina, offshore drilling will potentially become permitted but is unlikely to lead to any actual activity because past exploration of the Atlantic coast has not been promising.  Even if allowed, the oil industry will probably invest elsewhere.  Shale gas drilling might find a home in the state.  It is not believed to be as prospective as the Marcellus in Pennsylvania and New York.  But economic accumulations are plausible.  Pennsylvania leaning on regulation to assure environmental security will likely have to be studied and used as a basis for policy.

Many see the new sheriff in town as a blow to sustainable energy goals.  Climate change based policy may well take a back seat. Energy security drivers and energy efficiency measures, however, will have an important impact.  The International Energy Agency has forecast that well over 40% of carbon mitigation will need to come from using less; carbon dioxide sequestration will account for only about 10%.  In conclusion, energy efficiency measures are important and largely unaffected by the political shift.

You are currently reading The Post-election Energy Future at Research Triangle Energy Consortium.