This is going to surprise some of you- especially those of you who are aware that the Tesla is faster 0 to 60 than a Ferrari.  This is not about actual vehicular speed.  The electric motors provide instant torque.  But they also need a battery system that is both inexpensive and capable of delivering the boost of energy without compromising life.  So, 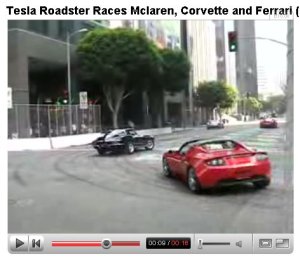 A screenshot of a youtube video of the Tesla racing the McClaren, Corvette, and Ferrari

the speed in question is the rate of discharge of the battery.  Acceleration needs a lot of power quickly.  Batteries are inclined not to last long if treated this way.

The Lithium ion battery is the front runner and likely to remain there.  All batteries need ions, lithium in this case, to move from one electrode to the other.  The two media they have to traverse are the electrolyte and the separator.  Additionally they need to move swiftly in and out of each electrode.  Over the years all these have been tackled well except for one- the ionic movement in and out of the cathode.  This is the rate limiting step for both charging and discharging.

Fast discharge ability can be achieved by using a companion component known as a super capacitor aka ultra capacitor.  Capacitors ordinarily are parallel plates holding charge.  The charging and discharging is blindingly fast.  The catch is that they hold very little charge.  Batteries on the other hand hold a lot of charge, but have the aforementioned shortcoming.  Supercapacitors hold a modest charge and are fast.  In combination they can be very effective.  The system would simply use the super capacitors for acceleration and the batteries for sustained speeds.

Neither of the first mass produced electric vehicles, the Nissan Leaf or the Chevy Volt, will have this feature.  The reason is cost and timing.  At the time they froze the designs for production supercapacitors were too expensive.  But their time will come and the solution will be elegant.

Last year a team from MIT reported in Nature that they had succeeded in synthesizing a cathode with high charge and discharge capability.  The characterization “Holy Grail” is vastly over used, and yet would apply to this discovery, if shown to be practical and repeatable.  In essence they are claiming a battery that combines the attributes of a super capacitor.  Predictably the naysayers were out in force.  Professor Goodenough (I am not making up that name) at The University of Texas at Austin stated that the discharge rates were there but not the charge rates.  He has credentials.  He is the holder of the seminal patent on Lithium Iron Phosphate cathodes.  This patent is the centerpiece of a plot that would give a soap opera a run for its money.

Current cathodes use cobalt and consequently are expensive.  They are also subject to fire and explosion in certain situations.  A manganese based cathode is now in use, as in the Leaf.  But most agree that the Iron based one noted above is the front runner.  It was picked by GM.  The prime purveyor of it is A123, an MIT spin off.  This latest MIT finding (different folks than the A123 founders) builds on that chemistry.  It very cleverly starts with a composition that is slightly off stoichiometric.   This means that the proportions of the elements are such that when you synthesize it you get something more than the compound in question.  The way they do it, this something more is another material which coats the basic compound.  This coating has the unique property that it acts as a sponge for the Lithium ions.  The ions are held long enough to transport normally into the body of the cathode material.  The net effect is fast movement of ions into the body.  Ultimately, the ideal battery will discharge fast (without penalty of curtailed lifetime) for performance.  But for reasons of convenience and practicality it must charge fast as well.  The investigators claim this as well, although this was disputed by Prof. Goodenough.  It’s been a year with no update.

In a recent story Toshiba is reported to have a fast charge system.  This appears to have a different yet chemistry.  Lithium titanate nano crystals on the surface of the electrode provide the fast charging capability.

The most important attribute required to make electric cars go is the battery cost.  Recently reported numbers are in the vicinity of $900 per kilowatt hour (kWh).  The new entry cars at the end of the year are expected to come in with batteries costing around $500 per kWh.  This figure needs to drop to around $200 for full viability.  This is because all-electrics such as the Nissan Leaf will have battery capacities of 22 to 25 kWh.  At the higher numbers the battery will be too great a fraction of the cost of the car.

In the longer term we can expect the costs and performance to fall into the realm of acceptability.  Electric vehicles are definitely in our future.