Japan and India are collaborating to fight back against high LNG prices.  In the Reuters report the countries are stated as strategizing to keep costs down.  Both these countries, and others in Asia, Korea in particular, depend upon LNG for critical needs such as power production.  This is especially the case in Japan, where the post Fukushima Daiichi disaster decision to shut down nuclear plants has caused natural gas to be a preferred fuel option.  India and China continue to use coal in large measure. 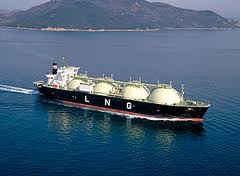 The problem faced by Asian buyers is that the delivered price is completely out of kilter with actual costs involved. First there is the pricing mechanism.  LNG price is pegged to the price of oil.  This harkens back to the days when oil and gas were at parity on the basis of energy content.  That went by the boards a while back and today oil is five times as expensive as gas in the US and about twice as expensive in Europe.  So the pegging to oil prices is simply a windfall for LNG producers. The users are striking back, and new options for sourcing, such as the US and new capacity in Australia, are helping.  Australia is particularly advantaged.  Their location allows for relatively low shipping costs and yet they enjoy the pricing dictated by other more distant producers.  This also applies to their export of iron ore to Asia.

The Japan collaboration with India is interesting in part because the collaboration is not with the near neighbor Korea, the second largest importer in the world next to Japan.  Clearly shipping logistics are not in play here, but more so diplomacy and the willingness to cooperate.  The mechanisms mentioned include coordinated purchasing.  Landed prices in India are already lower than in Japan, in something of a nod to the shorter distance from the Persian Gulf sources.  But these are still over 3 times the controlled price that domestic producers are allowed to charge.  This sort of disparity is evident in Argentina as well, where Bolivian gas is imported at a higher price than paid to domestic producers.

Although alternate pricing mechanisms are inevitable, this is still something of a sellers’ market.  Shale gas in the US has disrupted that balance to some degree.  Certainly LNG destined for the US is no longer needed.  That capacity is now going elsewhere, temporarily depressing prices in part because it all happened with such rapidity.  Eventually this will return to a supply demand balance that existed prior to the shale gas event.  The only disruption to this scenario would be significant shale gas production in importing countries.  All the indications are that this is unlikely any time soon.  Europe was the best bet but results in Poland to date have been disappointing.  The UK is making noise in this area but not much in the form of tangible results as yet.

Russia has every incentive to retain the current mechanism because it artificially raises the price they can charge for their pipelined gas to Europe and China.  Furthermore, highly variable pricing, such as based solely on Henry Hub may always be impractical.  This is because LNG production facilities are multi-billion dollar undertakings that rely upon predictable pricing for raw materials and product.  At least that is the argument that producers are vociferously making in the cited piece above.  No matter that similarly capital intensive industries such as iron and steel have survived, albeit barely in some years, with variable pricing on the product.

The slowness of federal permitting of US LNG exports is raising the issue as to whether this is in contravention of WTO regulations.  Some believe it smacks of protectionism.  Another interesting wild card is the expected explosion in the domestic use of LNG in transportation in displacing diesel.  Likely, however, is the scenario that much of the LNG will be from miniLNG sources and not the massively idled import terminal capability currently applying for export permits.

§ One Response to LNG USER COUNTRIES STRIKE BACK